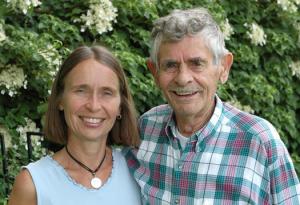 Sandi Blaze with her father, Charlie Blaze, who built many of the stone walls in his daughter’s garden Photo Credit: Contributed

Sooner or later, any gardener living in Connecticut, especially in our southwest corner of the state, has a day of reckoning with the ledge and boulders lying just beneath the surface of the soil.  Sandi Blaze, on Nod Hill Road in Wilton, has found a beautiful way of using the natural stone as a prominent feature in her spectacular garden.

Set on top of a hill, Sandi’s elegant home is faced with local stone, which gives a hint to the rocky nature of her property.  Instead of fighting the ledge and rocks, Sandi has worked these natural landscaping features into her garden design with staggered terraces, stone pathways and steps, many built by her father Charlie Blaze, as well as a large tract of exposed ledge covered with natural moss and lichen.

The hilly areas around Streets Pond, the reservoir between Nod Hill and Olmstead Hill, were once covered in apple trees.  Several beautiful old gnarled trees still grow down at the bottom of Sandi’s garden, below the terraced beds, together with newer peach trees and a hedge of blueberry bushes.

Massive trees create natural shade gardens up near the house, where Brunnera Polychroma, also known as Jack Frost, several varieties of fern, Hosta and Astilbe thrive in the low light.

Behind the house steep terraces, held up by old retaining walls now covered in climbing Hydrangea, lead to different vistas of the garden.  Flower beds line both sides of grass pathways on each terrace, and this is where you’ll find a riot of color, as perennials show off their colors and blossoms throughout the spring, summer and fall.  Sculptures, hidden seating arrangements and a sunken pool built, of course, from rocks, provide elements of surprise among Lupines and Lady’s Mantle.  One of Sandi’s favorite plants is Euphorbia polychroma, known more commonly as Cusion Spurge.  “It’s the first harbinger of spring and grows in a lovely round mound, covered in yellow flowers,” she told me, pointing out where she had planted it among the Dwarf GoatsBeard.  “Baptisia, or Blue Wild Indigo, is also dramatic at the back of a bed.”

Sandi Blaze’s garden is open once a year for viewing and anyone interested should write to pixieperennials@gmail.com

7 thoughts on “Win The Battle Against Ledge!”